With winter well and truly here bringing colder & shorter days so has come the need for feeding out.

Given that silage is perhaps the most common supplement feed across New Zealand farms its meant over the years, here at Rata we have developed a complete range of silage handling attachments. Below they are listed out with some of the pros, cons & features of each to help you decide what will best suit your needs. 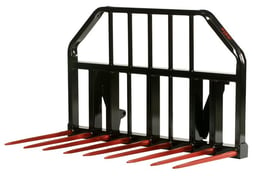 The Rata Silage Fork is a simple and rugged attachment that will get the job done and last a lifetime at minimal cost. The verticle bars of the back frame help to hold the silage in whilst giving the operator great vision through the frame to the material being handled which is generally silage, but through the warmer months it often finds itself as a clean up rake for hedge trimmings! The drawbacks of this attachment is the fact is does not leave as nice a stack face as some of the other attachments, this means it can leave the stack susceptible to secondary fermentation, also its inability to handle large quantitys at a time is another draw back for many big operators, however if you are feeding out constantly in small quantitys this is not such an issue as there would not be enough time for the fermentation to begin. As a result the Silage Fork often finds itself the choice of the smaller operator or lifestyler who just needs a simple attachment to do the job with minimal outlay.

Bucket Grabs more specifically designed for use with maize silage as the bucket holds the feed inside the bucket whereas with a grab or fork, loose maize silage can fall between the tines, The great benefit of the Bucket Grab is its ability to scoop up residual feed on the pit/bunker floor, this means every bit of silage can be used - this is something that a fork or grab cannot generally do as effectively. The top grab helps to take the largest amount of maize silage possible from the stack at a time, this helps to reduce time spent loading the wagon as large capcitys can be moved at one time. The greatest benefit of the Bucket Grab is that it can be used as a standard bucket for other applications other than feed handling. Bucket Grabs are not as common as some of the other silage handling attachments, mostly because its not as effective at handling conventional silage as Shear Grabs or standard Silage Grabs. 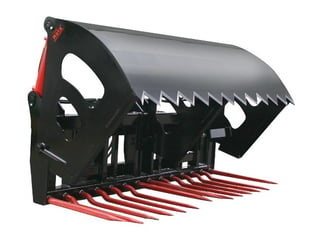 Rata Shear Grabs are generally at the top of the list in terms of finding the ideal attachment for your silage handling, the serrated knife cutting edge ensures the stack face is left clean and sealed preventing secondary fermentaion and degradation of the silage, this is paramount to ensure that your stock receives the most nutrition possible from the silage that you have spent all summer preparing! Also availalbe as an accessory for the Shear Grab is a bucket insert, this means it can handle maize silage with ease, as it prevents the maize falling between the tines & also means you can scoop up loose feed from the pit floor. Another feature of the Rata Shear Grab thats not shared by all grabs is the serrated knife cutting edge, this feature enables the grab to slice at a faster rate than a straight knife edge, this saves considerable time at the stack and gets you back to feeding out faster. Perhaps the only drawback of the Shear Grab is the considerably higher amount of investment outlay required to aquire one over against its more popular counterpart - the Silage Grab (we will go over this next), hence the reason why this attachment is generally most popular among the very large operators who are feeding out larger amounts of silage constantly and can make considerable savings by using an attachment that will reduce feed wastage. 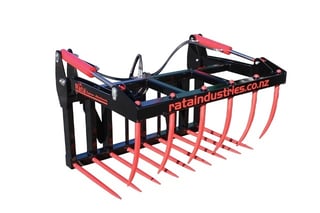 Rata Silage Grabs are the most common silage handling attachment in our range througout NZ. Silage Grabs easily penetrate the stack and handle large volumes of silage without a problem, the top grab function enables larger quantitys of silage to be handled than a silage fork, yet the use of tines in the top grab in place of a shear make for a faster 'bite' action than the Shear Grab due to the lower surface area to penertrate the stack, the verticle bars of the back frame give excellent vision of the material being handled whilst retaining it. Silage Grabs overall are the most economical way of handling silage from the pit to the wagon/feed out trailer due to the large volumes that can be handled and signicantly lower amount of required investment outlay to aquire one. As a result it has become Rata's number 1 silage handling attachment on farms throughout New Zealand. Much like the Silage Fork it is also an excellent tool for cleaning up hedge trimmings and the like in warmer months, just to prove how strong our Silage Grab is- check out this video of a Rata Grab picking up a car!

There are several other factors that make Rata Silage handling attachments the best, listed below are just some;

Tines (bale spears) we use in our grabs & forks are sourced from our German supplier SHW who have been in the iron working and forging industry for over 421 years! (founded in 1596) as a result are globally regarded as the leading producer for bale tines and spears world wide due to exceptional quality and track record.

All Rata Forks & Grabs come complete with Tapered Sleeve Bushes welded into the RHS which the tines are bolted into. This gives greater support to the tine & enable it to cope with greater loads and gives a longer working life, as opposed to being held just by the RHS wall which otherwise floggs out in a short time as found with inferier types of forks and grabs, Taper Sleeve Bushes help your attachments to last longer & decrease the amount of repair & restoration work that will have to be undertaken in their lifetime.

Get in touch today!

Our team would love to talk to you, so get in touch with us today to talk about your options & find what will work best for your application.