Our roots are in the ground. Inspirder by the mighty Rata tree and an icon of New Zealand history since huia would have perched in their branches, and moa walked over their roots.

Here at Rata Equipment, we are passonate about saving our native trees and support the Department of Conservation in their efforts to fight of pests and diseases that threaten out native trees. Read more about how we have the RATA name HERE

The abundant Rata tree flowers this year are thanks to the possum eradication efforts from the past 25 years. Previously, the pests would have made a meal of the trees. Some skeletal branches remained, scars from past possum attacks. The tree eventually ran out of energy, unable to produce new growth. 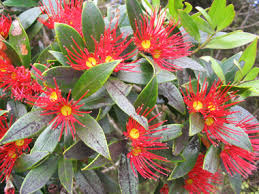 There are four main varities of native Rata trees in New Zealand, Northern rātā, Southern rātā, Bartlett's rātā and Parkinson’s rātā. The following is some information about the Northern rātā.

Northern rātā (Metrosideros robusta) is one of New Zealand's tallest flowering trees. It usually begins life as an epiphyte (or plant perched on a host tree) high in the forest canopy. Its roots grow down to the ground, finally enclosing the host tree and producing a huge tree up to 40 metres high with a trunk up to 3 metres in diameter. It is found throughout the North Island and in the South Island, south to about Westport. Hybrids with pōhutukawa are common in the upper North Island where the species distributions overlap.

Threats to pōhutukawa and rātā

As possum populations have built up in forest areas, there has been a corresponding loss of some of our forest species. Possums browse a wide range of plants but show strong preferences for some species like rātā and pōhutukawa.

Rātā and pōhutukawa trees cannot tolerate sustained possum browsing. A mature tree can be killed in three years with intensive browsing and even young trees, although they can survive for longer, will eventually die if browsed regularly. When the browsed trees die back, the canopy, or top layer of the forest, is opened up. This exposes other trees to windthrow and damage from storms, insects, weed invasion, and diseases.

Pōhutukawa and rātā are members of the Myrtle family. They are all under potential threat from the fungal disease myrtle rust which is now established in New Zealand.